A friend of mine joined the Finnish Orthodox Church last week. He had kindly invited me to the short ceremony of anointment and the mass before it. I was very happy for my friend who seemed to have found his spiritual home, and although I have never been too fond of the orthodox aesthetics, the ceremony was touching. My friend stood there barefoot (this was part of the script), clearly peaceful and calm, surrounded by his family and friends. There was something very human in all this – and something quite divine too.

A couple of weeks earlier I had been invited to open a conference with a speech. The European Forum of LGBT Christian groups held their annual gathering in Järvenpää, Finland this year. The theme of the conference was "Courage to follow the Law of Love". My duty was to make a connection between the theme and the issue of gender diversity or transgender people. While my recently anointed friend is not transgender, his ceremony reminded me of some of the things I had contemplated in my speech. I'll share a bit here (in English, since that was the language of the conference as well).

One of the objects of contemplation was Genesis – a scripture frequently used when someone wants to condemn (or deny the existence of) gender minorities, just like it is with sexual minorities as well. God created us male and female, they say. And so it says in the book. The first of the two different versions of our creation tells us three things: first, that God created human beings; second, that we were created in God's own image and likeness; and third, that we ware made male and female.

I find it strange that from these three clauses it is the last one that gets most of the references and attention. After all, the core of the matter would probably be that people are created by God and in the image of God. That, at least for me, is quite an amazing message. For me it means that like God, I too am a mystery, a secret to myself and others. Further, it means that we are in theory able to look into Heaven and see God through the faces of each other. Somehow the question of gender seems a bit lame and earthly compared to this.

But what I simply cannot understand is the amount of cheekiness and arrogance in some of our fellow human beings as they claim to know what is included in God's image and what is not.

Besides, the Genesis has always been interpreted in various different ways. Numerous Jews and Christians have read these clauses as evidence of God's own androgyny or sexlessness. Yet others have interpreted that this scripture actually tells about the creation of the first human being as a perfect androgyne, a hermaphrodite if you will, that was later to be split in half.

Further, it is not a coincidence that the first portrayals of God in human form, Jesus, by very early Christians, look rather peculiar to the Christians today. There are works of art where Jesus is depicted beardless and delicate, or a bit plump, absolutely non-muscular – very similar to the eunuchs of that time, to be blunt. He is carved in stone riding a donkey not in the way rulers ride their horses but like women sit, sideways. Jesus Christ, later to be referred to as the perfect man and perfect God, who was born of a woman. All that was human in him was from a female, none of it from a male.

Both the Bible and the 2000 years of Christian tradition embrace actually quite a few references to the ambiguity and quivering of gender. This evidence seems to point to at least two directions at the same time. On one hand it tells us that gender is probably something quite irrelevant and earthly, and has no meaning in the Kingdom of Heaven. This line of investigation concentrates on gender as in being men or women.

On the other hand many references hint very strongly that there is important symbolism in gender, something divine even. And this evidence is about gender as many of us actually experience it: as a phenomenon that is so strange and fluid, ambiguous, puzzling and almost otherworldly, that our language cannot really grasp it. Gender might be more aptly described through poetry and art, similarly to the phenomenon of love – or God.

I was diagnosed with burn out and moderate depression last spring. I was baffled. I had to reconsider my self-perception quite thoroughly. Till then I had been someone with no mental health issues – especially in my childhood family, where I had even grown to be the only sane one in the middle of the fragile and aching souls. And I am not really exaggerating here. I crumbled into pieces.

I got help and support, medication and therapy, and it took me about nine months to get back on my feet. Those who have experienced depression know that recovering from it is a process of change. Those nine months I was pregnant with a new me. I was blessed with a good midwife, a therapist who understood enough to be sensitive about the variation of gender and sexuality issues in my life.

There is still another parallel to pregnancy: as a depressed person I started to bump into others everywhere. Suddenly the world was full of people who had experienced depression. Half of my friends shared their stories with me. Not everybody got proper help. Some of my transgender friends were stuck between two diagnoses: the doctors didn't write them the papers needed for the gender reassignment to proceed before they had their depression taken care of, and at the same time other doctors would not see the depression from behind the evident dysphoria and pain connected to their gender identity.

During my sick leave I frequented the mass on Thursdays at noon, as I was too tired to get up early enough on Sunday mornings, but felt the hunger of communion. I felt peaceful in the nearly empty church, among others who had time to attend the mass in the middle of a workday: the elderly, probably some unemployed, undoubtedly also a few mental health patients like me, and a handful of students.

I used to stare at the altarpiece, my mind drifting away from the words of the priest. Jesus would look back at me, showing me his wounds and letting me compare them to mine. Like my children and I have studied the size and details of our hands.
The altarpiece in the cathedral of Helsinki portrays Jesus dead, in the arms of the disciples. However, his wounds have much more to do with life than with death. When he is resurrected, the wounds remain. They are part of his perfect humanity, they don't need to be erased, there's nothing to fix.

I like to think this is the God whose image I was created in, God full of beautiful paradoxes. A perfect man, whose humanity is completely female. A perfect, flawless human being with lethal wounds, permanent scars and memories of pain. And a teacher who demands us to do the impossible: to love our fellow human beings as ourselves.

Obviously the first requirement before we can try to follow this law is that we make it possible for each other to love oneself. Regardless of the prefix of our gender – be it cis or trans or something else – we have to do all we can to make sure everyone can look into the mirror and recognise the face and the form and the silhouette as one's own. And every once in a while, when the morning has been really sunny and the coffee perfect, we might be able to get a glimpse at the Kingdom of Heaven and the face of God through our own eyes. 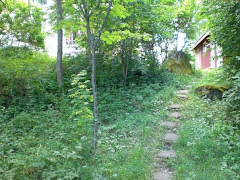